It’s a beautiful spring morning in April. My semester is winding down, and I don’t have class until 4pm, so naturally, I hop in my car and head downtown to one of my most visited local art spots, the Greensboro Cultural Center. I come by the GCC as often as I can. The small galleries are the perfect size to inject some art love into your day with their small-in-stature but big-in-talent exhibitions. The building holds some of Hand/Eye’s most beloved local galleries such as the Greenhill (which Emily covered last week) and the CVA, my personal favorite and my destination for the morning.

Up right now for only two more days is Three Way, featuring Raleigh-based artists Shaun Richards, Derek Toomes and Lincoln Hancock, long time collaborators and friends. This is their second official show together, following NCMA’s 2012 exhibition Word Up: the Intersection of Text and Image, where the curator asked them all individually to participate, not knowing of their already existing friendship. The CVA took their collaboration to the next level, bringing them together intentionally in a thoughtfully composed show to explore their differing perspectives on the American social experience. Three Way acts as an artistic braid, weaving together the visual and conceptual tresses of these similar artists. Starting at the front of the space, visibly similar pieces rotate from artists to artist, providing a comfortably unstructured composition. 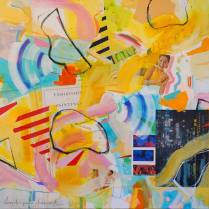 As a visitor, I am first introduced to Shaun Richards. Most of his pieces are large scale oil paintings that feel like mixed media due to the combination of different formal elements. In every painting, he uses large text, one major subject, and smaller, stylistic detailing, as seen in the far left image above. His work is like contemporary pop art, showing bold and recognizable symbols and forcing the viewer to rethink chosen words, like “safety” or “standard” by placing them along side of juxtaposing or unexpected images. His section of the wall ends seamlessly, moving into Lincoln Hancock’s small and clearly mixed media canvases, exemplified in the center picture. The Guilford College alumni’s (class of  ’98) work is colorful and chaotic, but the organization somehow makes sense next to Richard’s classic compositional riffs.

Hancock and Toomes have the least in common visually, mimicked in the spacial separation of their work. Toomes presents mostly sketches in this show, mixing together graphite and charcoal and throwing in pops of acrylic color, as you can see in the far right picture. He, like Richards, shows large single subjects but evokes meaning in the smaller surrounding details on the paper. He often breaks up the frame, causing you to slow down, look carefully, and decode the message he is trying to send you. 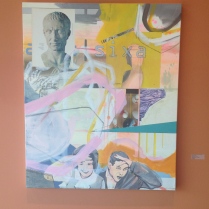 At the back of the gallery on the single orange painted wall hang three unique pieces. At this point, I was playing a game with myself, trying to guess which artist created what piece, but these left me stumped. It turns out, the artists collaborated to make three new multi media works specifically for the show, even titled Three Way, numbers 1, 2, and 3. They pull together some of the most thought provoking elements from each of their styles; Richard’s realistic figure drawing, Hancock’s frenzied pops of color, and Toome’s delicately crafted typography. Even more than the style, these works solidify their messages of consumption, concepts of normalcy, iconography, and isolation. I don’t see it as coincidence that their work sits just across the hall from that of Romare Bearden and Noe Katz (a super-talented Greensboro-based painter) who also comment on the unique and challenging aspects of the American social experience. Within the GCC lies the ultimate Three Way, three unique and inspiring exhibitions and galleries, bringing us small pieces of beauty and understanding every day.

Be sure to check out the artists websites, as well as the gallery websites, all linked above. Three Way comes down on April 25th, so hurry over and don’t miss this very special exhibition.